Mrs. Dewey was probably the most attractive search engine in the history of search engines, although not necessarily the fastest. But on closer inspection, the idea seemed to work. Mrs. Dewey was a fully animated search engine where a librarian (played by Janina Gavankar) in a futuristic urban landscape answers our questions on a lot of video material. However, the focus here is not on the answers, but on the reactions of Mrs. Dewey when she waits for our questions or the answers: bored, mischievous, sad, happy or embarrassed. Ms. Dewey a Microsoft project was online from 2006 to 2008. Anyone who has been involved with search engines knows that two years can be a long or a short time for search engines. Successful concepts will be taken over by larger ones after one year at the latest, less successful projects need more than two years to generate a relevant number of users, if they succeed at all. Mrs. Dewey managed to draw attention to herself at least quite quickly. Most critics have thrown themselves at the problems before all: Long response time, bad result display,... Perhaps it was about collecting and analyzing user requests to learn more about what users want. It's just speculation, but Bing's knowledge base, Satori and Microsoft Academic Search, which also used Satori started in 2009 a year later. 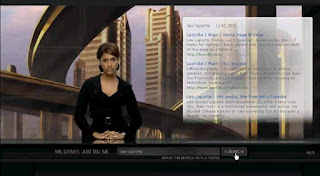