Yahoo started in 1994 as a web directory, from 1996 AltaVista was offered additionally, if the catalogue did not show any correspondence. Yahoo comes from the USA and was developed by Jerry Yang and David Filo. In 1997, Yahoo introduced an e-mail service, other products followed, today Yahoo is a web portal (access to web products such as web, image, video, news search, mail, instant messaging, soping, community services and more). Since 1998, Inktomi has been used as a search engine in addition to the catalogue. In 2002, Yahoo gave up catalogue search and switched to Google. From 2003, Yahoo! Search had its own web crawler-based search engine. In 2011 they switched to Bing, in 2015 they switched to Google and since 2019 Bing is used again. In 2005, Yahoo! launched its Yahoo! video site, which combined video content from a variety of sources. It searched the web, accepted uploads, and included direct feeds from partners. Previously, users could find and view online videos in Yahoo offerings such as music, news, sports, film and television sources. With the new offering, this content was combined and made accessible to users via a central page. With the change from Yahoo's own search technology in 2011 to Bing, 2015 to Google and since 2019 back to Bing, the vertical search offers of Bing and Google were also used. 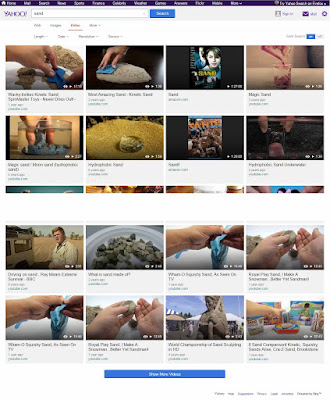